Originally published 12/2/10 here on The Doctor Weighs In. 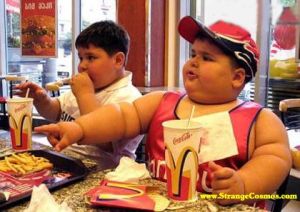 When I was a kid, people used to say, “Oh, don’t worry, she will outgrow her baby fat.” And, by and large, I did.  I was an average-sized teen and young adult, and, like most Americans, only started packing on the pounds later in life.  But things are different now.

There are many more fat kids than there used to be and there are way more fat teens than ever before.  Even more troubling, according to an article in the Journal of the American Medical Association (November 10, 2010), is that obese teens are highly likely to become severely obese adults – by that I mean body mass index (BMI) of 40 or higher.

Severe obesity is not benign.  It is associated with lots of things you don’t want to have, such as high blood pressure, diabetes, abnormal lipids, asthma and arthritis and shortened life expectancy.  Although some obese people can lose weight (often only 5-10% reductions) in the traditional manner with diet and exercise, according to the JAMA article, bariatric surgery often results in weight loss in the 60-70% range for prolonged periods of time (e.g., 10 years or more).  As the article states, “bariatric surgery is the only treatment that has been shown to have long-term success.”

Since 10% off of 400 pounds is still 360 pounds, it is easy to see why bariatric surgery could become the “new normal” for severely obese people with serious complications, such as diabetes and hypertension.  However, bariatric surgery is associated with potentially life-threatening complications, such as pulmonary embolism, leakage, and pneumonia.

A better option, of course, is primary prevention.  In plain language, doing what it takes to not get fat in the first place.  With that as a premise, the authors of the JAMA study wanted to determine which individuals early in life are likely to become severely obese later in life.  They theorized that by understanding this, you could design interventions to prevent the development of severe obesity and its complications.

By studying  the results of the US National Longitudinal Study of Adolescent Health, a national cohort of 8834 individuals aged 12 to 21 followed from 1996 until 2009, the authors found that obese adolescents were significantly more likely to develop severe obesity in young adulthood than normal-weight or overweight adolescents (hazard ratio, 16.0; 95% CI, 12.4-20.5).  In addition, they found that a 1% percent of adolescents were already severely obese and most of them remained so into adulthood.

So what does this study suggest in terms of prevention?  First of all, primary prevention strategies, aimed at preventing obesity in the first place must be initiated in childhood – waiting for a plump toddler to “grow out of it” may no longer be an acceptable (or safe) approach.  Second, we need targeted programs to help obese teens, particularly early on in their obesity, to develop new, healthier lifestyles – whether it is more aggressive PE and nutrition classes in school or community based weight loss “boot camps.”  Obese teens, their family, and friends need to make healthy eating and vigorous exercise the new normal or we will face a future where way too many people suffer from severe obesity complications and/or have to undergo bariatric surgery.

I know some people will roll their eyes when they hear the phrase, “it takes a village…,” but in the case of severe obesity, it will take a village to help reverse the rapidly escalating trend of obesity in kids and teens.  We will have to learn from – and mimic – states, such as California, that have applied multi-pronged approaches that have successfully reduced tobacco use.

The obesity epidemic in the US is not purely a “personal choice” or “personal blame” issue.  It has been nurtured by recent changes in food policy, school policy, economics, the technology revolution, and just about everything else that impacts our daily lives.  To halt and, hopefully, reverse the obesity trend, is going to require heavy lifting.  We may have to spend some time and (god forbid) money on it.  Too much trouble?  Not your problem?  Think again, health care costs are driven, in large part, by chronic illnesses, particularly diabetes and heart disease.  Obesity is the fuel for that fire.  If you think health care is too expensive now, just you wait…