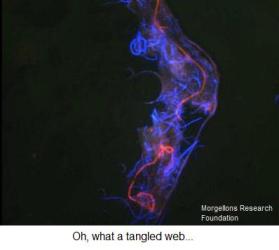 A fascinating new paper:  Morgellons Disease, or Antipsychotic-ResponsiveDelusional Parasitosis, in an HIV Patient: Beliefs in The Age of the Internet

He was referred to the psychiatry department by his primary-care physician (PCP) because of a 2-year-long complaint of pruritus [itching] accompanied by the belief of being infested with parasites. Numerous visits to the infectious disease clinic and an extensive medical work-up…had not uncovered any medical disorder, to the patient’s great frustration.

Although no parasites were ever trapped, Mr. A caused skin damage by probing for them and by applying topical solutions such as hydrogen peroxide to “bring them to the surface.” After reading aboutMorgellons disease on the Internet, he “recalled” extruding particles from his skin, including “dirt” and “fuzz.”

During the initial consultation visit with the psychiatrist, Mr. A was apprehensive but cautiously optimistic that a medication could help. The psychiatrist had been forewarned by the PCP that the patient had discovered a website describing Morgellons and “latched onto” this diagnosis.

However, it was notable that the patient allowed the possibility (“30%”) that he was suffering from delusions (and not Morgellons), mostly because he trusted his PCP, “who has taken very good care of me for many years.”

The patient agreed to a risperidone [an antipsychotic] trial of up to 2 mg per day. [i.e. a lowish dose]. Within weeks, his preoccupation with being infested lessened significantly… Although not 100% convinced that he might not have Morgellons disease, he is no longer pruritic and is no longer damaging his skin or trying to trap insects. He remains greatly improved 1 year later.

(Mr A. had also been HIV+ for 20 years, but he still had good immune function and the HIV may have had nothing to do with the case.)

“Morgellons” is, according to people who say they suffer from it, a mysterious disease characterised by the feeling of parasites or insects moving underneath the skin, accompanied by skin lesions out of which emerge strange, brightly-coloured fibres or threads. Other symptoms include fatigue, aches and pains, and difficulty concentrating.

According to almost all doctors, there are no parasites, the lesions are caused by the patient’s own scratching or attempts to dig out the non-existent critters, and the fibres come from clothes, carpets, or other textiles which the patient has somehow inserted into their own skin. It may seem unbelievable that someone could do this “unconsciously”, but stranger things have happened.

As the authors of this paper, Freudenreich et al, say, Morgellons is a disease of the internet age. It was “discovered” in 2002 by a Mary Leitao, with Patient Zero being her own 2 year old son. Since then its fame, and the reported number of cases, has grown steadily – especially in California.

Delusional parasitosis is the opposite of Morgellons: doctors believe in it, but the people who have it, don’t. It’s seen in some mental disorders and is also quite common in abusers of certain drugs like methamphetamine. It feels like there are bugs beneath your skin. There aren’t, but the belief that there are is very powerful.

This then is the raw material in most cases; what the concept of “Morgellons” adds is a theory, a social context and a set of expectations that helps make sense of the otherwise baffling symptoms. And as we know expectations, whether positive or negative, tend to be become experiences. The diagnosis doesn’t create the symptoms out of nowhere but rather takes them and reshapes them into a coherent pattern.

As Freudenreich et al note, doctors may be tempted to argue with the patient – you don’t have Morgellons, there’s no such thing, it’s absurd – but the whole point is that mainstream medicine couldn’t explain the symptoms, which is why the patient turned to less orthodox ideas.

Remember the extensive tests that came up negative “to the patient’s great frustration.” And remember that “delusional parasitosis” is not an explanation, just a description, of the symptoms. To diagnose someone with that is saying “We’ve no idea why but you’ve imagined this”. True, maybe, but not very palatable.

Rather, they say, doctors should just suggest that maybe there’s something else going on, and should prescribe a treatment on that basis. Not rejecting the patient’s beliefs but saying, maybe you’re right, but in my experience this treatment makes people with your condition feel better, and that’s why you’re here, right?

Whether the pills worked purely as a placebo or whether there was a direct pharmacological effect, we’ll never know. Probably it was a bit of both. It’s not clear that it’s important, really. The patient improved, and it’s unlikely that it would have worked as well if they’d been given in a negative atmosphere of coercion or rejection – if indeed he’d agreed to take them at all.

Morgellons is a classic case of a disease that consists of an underlying experience filtered through the lens of a socially-transmitted interpretation. But every disease is that, to a degree. Even the most rigorously “medical” conditions like cancer alsocome with a set of expectations and a social meaning; psychiatric disorderscertainly do.

I guess Morgellons is too new to be a textbook case yet – but it should be. Everyone with an interest in the mind, everyone who treats diseases, and everyone who’s ever been ill – everyone really – ought to be familiar with it because while it’s an extreme case, it’s not unique. “All life is here” in those tangled little fibres.