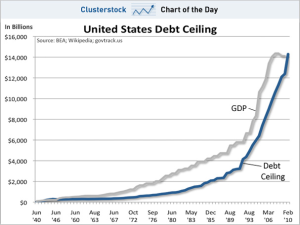 While the news this morning is not good, I still don’t think Congress will fail to raise the debt limit; the economic consequences would be catastrophic, and there’s too much political risk for either party to allow it to go that far.

And really, this whole argument is pretty dumb. The fight is about whether or not the United States will pay for debts already incurred to fund defense, Medicare, the CDC, NOAA, the Veteran’s Administration, National Parks, the Corps of Engineers, the FBI…Congresses already authorized those programs and the costs thereof, Presidents signed them into law, and, like any responsible entity, we have to pay for them.

We can’t just tell the world, and our own citizens who hold the nation’s debt, “Never mind, we decided we don’t want to pay you back the money you loaned us.” That’s unethical, immoral, and by my read, illegal.

Lost in the nastiness is the simple fact that those refusing to consider raising the debt limit are going against the Constitution, specifically the Fourteenth Amendment, which reads in part “The validity of the public debt of the United States, authorized by law, including debts incurred for payment of pensions and bounties for services in suppressing insurrection or rebellion, shall not be questioned.” (The Fourteenth Amendment was passed after the Civil War, and this Section (4) was specifically designed to ensure the US paid its war debts, while repudiating those of the Confederate States.)

Here are a few ways a failure to raise the debt limit may impact providers, payers, and the rest of us.

1. payments to providers for services rendered to Medicare recipients could be delayed.

2. transfer of funds to the states for the Federal government’s portion of that state’s Medicaid obligation could be delayed.

3. other Medicare-related funding, including direct payments to hospitals, could be delayed.

5. enforcement actions may be put on hold if they are deemed ‘non-critical’

6. payment of funds for graduate medical education may be put on hold, just in time for the fall academic term

Here’s hoping it doesn’t get that far.

One thought on “The Debt Limit, Medicare, and Medicaid”