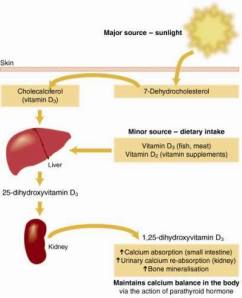 When I studied and practiced medicine vitamin D was not an issue, or maybe a settled issue: the vitamin enhances calcium absorption and is important for the maintenance of bone health. So I was startled when I recently came across this statistic: Sales of vitamin D in the U.S. were $40 million in 2001, $50 million in 2005, and in 2008 it spiked to $425 million. That’s an astounding 8.5 fold increase in 3 years! What happened? Was there a scientific breakthrough demonstrating hitherto undiscovered preventative or healing powers? Is there an outbreak of a worldwide epidemic of vitamin D deficiency, as some advocates claim? Let’s look at the facts.

What is vitamin D

Vitamin D, obtained from sun exposure, food, and supplements, is biologically inert and must undergo two hydroxylations in the body for activation. The first occurs in the liver and converts vitamin D to 25-hydroxyvitamin D, also known as D2. The second occurs primarily in the kidney and forms the physiologically active 1,2-dihydroxyvitamin D, also known as D3. It is this form that is biologically active. Vitamin D is measured in International Units (IU) and is potent in small quantities – one IU is equal to only 0. 025 micrograms! Or, 40 IU is equal to one microgram.

Its role in promoting bone health through regulation of calcium is well established. But recently, several other claims have cropped up in legitimate, and in some less legitimate, publications. In vitro and animal studies, as well as some epidemiological studies, show some protective effects against colon cancer. But claims have been made about protection from prostate cancer, cardiovascular disease, multiple sclerosis, depression and general bad mood, and 30 other maladies. When you see such miraculous powers, beware; if it’s too good to be true…

In view of the conflicting claims and public confusion the U.S. and Canadian governments asked the Institute of Medicine, the medical arm of the National Academy of Sciences, to review the state of knowledge on the subject. As befits an institution of such high reputation, a panel of experts conducted an exhaustive review of the published literature. One of the remarkable finding was the paucity of good data. Studies were either poorly designed or executed, or were too small to draw definitive conclusions. These studies were not included in the analysis.  But from the studies that did pass muster they came to the conclusion that people should aim for blood levels of 50 nanomoles per liter. This level can be achieved with 600 IU of vitamin D per day, or 800 IU for people over 70. Sun exposure of 5 -30 minutes a day, on the face, arms, or back will provide this level. It can be also be obtained from fatty fish like salmon or tuna, milk, yogurt, egg yolk, and liver. Some foods, like cereals, milk and orange juice, are supplemented with vitamin D.

What if you miss a day’s, or a month’s, intake of vitamin D, or if you live in the arctic circle and have no sun the whole winter? Are you going to develop rickets (a bone disease caused by vitamin D deficiency) or osteoporosis? The answer is no. Germany does not fortify any of its foods with the vitamin, and suffers no increase in bone disease. What about people who live in Alaska, or Norway, or Siberia? No evidence vitamin D deficiency. At least part of the reason could be the fact that vitamin D is fat soluble, and is stored in fat tissue. So people who absorb enough light in the spring, summer and fall have plenty of it released into the circulation during the winter months.

The IOM recommendations were met with howls of protest by researchers and endocrinologists. Some arguments were quite reasonable and deserve consideration, other were purely passionate, and sometimes self-serving. In any event, the Endocrine Society published its own guidelines: under 50 nanomoles/liter is “vitamin D deficient”, and between 50 and 72.5 is classified as “insufficient”(the difference between the two eludes me). An ‘ideal’ level is 100-150 nanomoles/liter. Such a level would require 1500 -2000 IU daily.

How do you resolve the controversy? Do the experiment. A clinical trial began enrolment for a 5 –year, 20,000-person trial to test the effects of vitamin D supplements on cancer and cardiovascular disease.

In the meantime you are left with the Hamletian dilemma: to supplement or not to supplement. Unlike Hamlet, this is not an existential dilemma; either way you’ll do just fine. But if you decide to supplement remember that more is not always better. Supplements of 10,000 IU were associated with hypercalcemia (high blood calcium levels), which can cause cardiac arrest, and with pancreatic cancer.

Dov Michaeli MD PhD is a basic researcher who writes at the Doctor Weighs In.