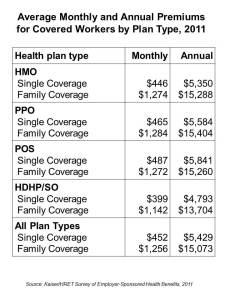 This health cost watermark finding was published in the always-informative annual Kaiser/HRET Survey of Employer-Sponsored Health Benefits for 2011. This study slices and dices the employer-based health insurance market across many dimensions, in terms of size of employer, type of employer, employee cost sharing, prescription drug plans, among other parameters.

The percentage of employers offering health benefits sharply fell over one year between 2010 and 2011, from 69% to 60%. This was most pronounced among small firms with fewer than 50 workers. For those employees in small firms that offer health benefits, 52% are paying over 50% of the annual premium for family coverage – roughly $7,500 a year.

The issue of “choice” is often mentioned in health policy discussions. The larger the firm, the larger the number of health plan choices offered to workers: Across employers of all sizes, 47% offer one plan type, 36% offer two plan types, and 18% offer 3 or more types of plans to workers. It’s the largest firms (often referred to as “jumbo” companies) with 5,000 or more employees that offer greater choice compared with small or mid-sized companies.

There has been a perceptible shift since 2009 in the proportion of firms offering high-deductible health plans, growing from 8% in 2009 to 17% in 2011 — roughly doubling in two years. This trend is shown in the second graph. HDHP growth was especially marked in smaller companies, firms in the Midwest, and manufacturers. Deductibles for single coverage in HDHPs was at least $1,000, and 12% faced deductibles of at least $2,000.

Worker contributions to monthly premiums has more than doubled since 2001, when the monthly payment was $149 for a family of four, reaching $344 a month in 2011 for family coverage.

For prescription drug coverage, two-thirds of firms have three-tier plans consisting of generics, approved branded drugs, and brands not on the formulary in the third (high) tier. 14% of companies have four or more tiers in their prescription Rx plans, growing from 3% in 2004 when the fourth tier was first surveyed in the Kaiser/HRET survey. Average copayments for drugs in 2011 were $10 for first tier/generics, $29 for second-tier/preferred, $49 for third-tier (nonpreferred), and $91 for fourth-tier specialty drugs. Coinsurance on the fourth tier averaged 29% in 2011.

An important trend among U.S. employers is a renewed interest and support of wellness for employees. 90% of large and 65% of small employers offer at least one wellness program, most commonly web-based resources for healthy living, smoking cessation, discounts to gyms or on-site exercise facilities, and weight loss programs. Overall, 22% of employers offering health benefits offer health risk assessments, doubling from the 11% offering HRAs in 2010. 10% of firms provide a financial incentive to nudge employees to complete an HRA.

Health Populi’s Hot Points:  The rise of health plan costs for employers is driving a rise in employee cost-sharing for health insurance, co-pays, coinsurance amounts, and deductibles (where used). RAND calculated in the September issue of Health Affairs which focuses on The New Urgency to Lower Health Care Costs that ten years of gains in income for a family of four was ”wiped out” by increases in health care costs. Researchers at RAND found that if the cost increases in health had been equal to general inflation (which was lower in the period), then that family of four would have had $5,400 more in their household pocket each year.

The recession and tight job market in the U.S. has compelled workers to stay put in their jobs. With incomes relatively flat and health costs increasing faster than the cost of living, workers who are blessed to receive health benefits at work are working hard for those benefits, essentially trading off real income for access to a health plan. This has translated into a 131% increase in worker contributions to health premiums. Other cost-sharing such as co-pays for physician visits and prescription drugs, add to this burden on U.S. households covered by a health plan. But can people afford not to opt-in to the health insurance offer by employers? Most employees who are offered health benefits elected to take up the coverage. In 2011, 81% of eligible workers opted in in 2011. But, not surprisingly, this varies by wage level. More employees in firms with a lower proportion of lower-wage workers are more likely to take up coverage (83%) than eligible employees in firms with a higher proportion of lower-wage workers — companies where 35% or more of workers earn $23,000 or less annually. That cadre of workers takes on a do-it-yourself health care plan, which might consist of a combination of ER and retail clinic visits, immunizations at the pharmacy, and OTC medicines to self-manage care at home. In fact, due to cost, more U.S. health citizens are delaying care — whether insured or not.

Jane Sarasohn-Kahn is a health economist writing at Health Populi.