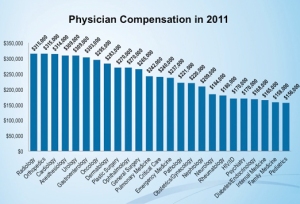 One-half of physicians believe they’re not fairly compensated for their work – in particular, those working in primary care. Only 11% of doctors considering themselves “rich.”Medscape’s 2012 Physician Compensation Report compiled data from over 24,000 U.S. physicians across 24 specialties and found the bulk of physicians to see themselves working harder and 1 in 4 making less money than last year.

This has led to growing frustration and worry, where some physicians are resenting the large pay gap between specialists and primary care. That frustration looks poised to increase with doctors concerned that accountable care will further eat into incomes, and increased regulation and administrative hassle “take the joy out of medicine,” as Medscape coined the feeling.

In 2011, pediatricians earned on average about one-half of what radiologists took home in pay: about $150K versus $315K. The top physician earners along with radiologists were cardiologists, urologists and orthopedic surgeons. The lowest-earners were pediatricians, internists and family medicine doctors. Still, while they are top-earners, orthopods’ and radiologists’ income declined an average of 10% between 2010 and 2011.

Physicians in single and multispecialty group practices, and those within healthcare organizations, earn higher incomes compared with colleagues in academia, outpatient clinics and solo practitioners.

If they had to do it all again, would physicians choose to be physicians? 54% would still pick medicine as a career…the other 46? Not so much… 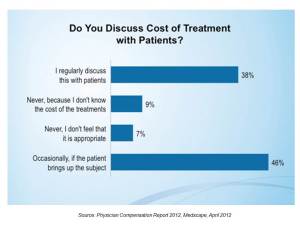 Health Populi’s Hot Points: Economics is driving physician discontent in the United States. Not only are at least half of medical specialties seeing falling incomes, but the future potential for money looks dire in at least two respects: accountable care is seen by at least one-half of physicians as a cause for income to decline; and, regulations and paperwork eat further into profit margins for physician practices.

There are two important patient-facing effects that Medscape measured related to health economics. Look at the second chart: over one-third of doctors overall regularly discuss the cost of treatment with patients, and nearly one-half talk about costs when patients bring up the subject. Only 16% of doctors say they “never” talk about the cost of treatment with patients.

Second, the question of testing: 69% of doctors say they will not reduce testing to contain costs for two reasons:

Consider these data points as a statistic-about-to-change. What happens in accountable care and patient-centered medical home models? Then, guidelines become front-and-center as physicians’ are compensated based on more budget discipline, quality, team work, and performance. Physicians may not reduce testing to save costs in today’s discounted fee-for-service milieu; but as their income is rooted in team-based success, and not volume-driven, being more mindful about what tests are most appropriate and necessary will change this mindset. The impact may not immediate, but the lab business as we know it today will be impacted by this changing mentality and payment regime.

Beyond tests, the frustration of primary care doctors vis-a-vis physicians earning as much as double as they are will be another front-center issue in accountable care and PCMH, where primary care becomes the front-door for patient check-in, prevention, and early diagnosis. Income shifts may be inevitable, as population health management priorities share the stage with individual acute care. This is a discussion Americans haven’t yet had, and it will be heating up over the next few years.