“It Ain’t Necessarily So,” Porgy and Bess by George Gershwin

Isn’t that the ideal most people strive for? Never mind living to 120; what we want is to live healthy to whatever age biology allotted us. Age is the major risk factor for most cancers and for chronic diseases like arthritis. Why is it? Evolutionary biologists tell us that this is nature’s way of clearing us off the stage, so as not to compete with the young for resources. Maybe. I find this theory a bit unsatisfying, if for no other reason than the fact that lower species, like bacteria and fungi, basically live almost forever (they do eventually do die out by senescence) because every mother cell simply divides into two brand new daughter cells. Other species, invertebrates as well as some vertebrates, use the process of parthenogenesis, or asexual reproduction involving the egg only without fertilization by the sperm (no fun there, except for some man-haters who love the concept), thus forming genetic clones of the mother.  Also, most organisms in nature rarely live to their biologically-determined limit –they fall prey to disease and predators. So aging per se couldn’t be a major selective force.

END_OF_DOCUMENT_TOKEN_TO_BE_REPLACED 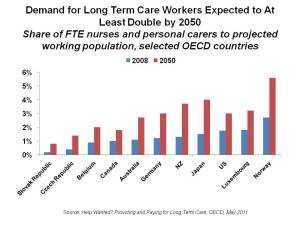 By 2050, the demand for long-term care (LTC) workers will more than double in the developed world, from Norway and New Zealand to Japan and the U.S. Aging populations with growing incidence of disabilities, looser family ties, and more women in the labor force are driving this reality. This is a multi-dimensional problem which requires looking beyond the issue of the simple aging demographic.

Help Wanted? is an apt title for the report from The Organization of Economic Cooperation and Development (OECD), subtitled, “providing and paying for long-term care.” The report details the complex forces exacerbating the LTC carer shortage, focusing on the fact that current policies to address this future are fragmented and piecemeal. Instead, OECD argues, policymakers must smartly weave together a comprehensive approach that addresses the many facets of the problem.

END_OF_DOCUMENT_TOKEN_TO_BE_REPLACED

First published 3/7/11 on The Doctor Weighs In

To Pat, on her birthday

At first it sounded like “so, this mouse walks into a bar and asks the bartender, guess how old I am” joke, but then on second thought…

But before we go on, remember the movie “The Curious Case of Benjamin button”? To refresh your memory, it’s about a person who was born 80 years old (yes, you read it right) and got progressively younger until he died as an infant some seventy years later. Before you laugh, let me remind you: that’s almost the reverse of Progeria, a rare condition that is remarkable because its symptoms strongly resemble normal human aging, but occur in young children (see picture above). Their head becomes shrunken, narrow and skin becomes wrinkled within a few years after birth. They are bald, lose their eyebrows, and they develop diabetes, hypertension, atherosclerosis, heart disease, and die mostly in their early teens of heart attacks or stroke. We also know that this disease is due to a single mutation in a gene called lamin A.