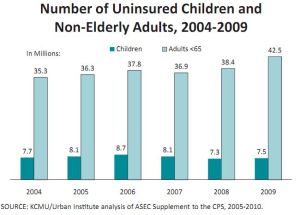 Amid all the talk about repealing health care reform and the need to change Medicare to a privatized voucher program because of rising costs, one never hears a single word from the deficit hawks about the uninsured. Remember them? There are about 50 million in the U.S., the only nation in the advanced industrial world without universal coverage. And the reform bill signed into law last year would reduce their ranks by about two-thirds. The Republican “path to prosperity,” which would repeal reform, did not even address the issue.

The Department of Health and Human Services today released a report that showed how much those uninsured are costing the rest of us — up to $73 billion a year, most of which is shifted onto the insured in the form of unpaid bills at the hospital. Reform would lower those costs by streamlining Medicare. The Republican plan would charge you higher premiums, unless, of course, they plan to repeal the law that requires hospitals to treat the uninsured when they show up on their doorsteps. Perhaps that’s next.