One-half of physicians believe they’re not fairly compensated for their work – in particular, those working in primary care. Only 11% of doctors considering themselves “rich.”Medscape’s 2012 Physician Compensation Report compiled data from over 24,000 U.S. physicians across 24 specialties and found the bulk of physicians to see themselves working harder and 1 in 4 making less money than last year.

This has led to growing frustration and worry, where some physicians are resenting the large pay gap between specialists and primary care. That frustration looks poised to increase with doctors concerned that accountable care will further eat into incomes, and increased regulation and administrative hassle “take the joy out of medicine,” as Medscape coined the feeling.

In 2011, pediatricians earned on average about one-half of what radiologists took home in pay: about $150K versus $315K. The top physician earners along with radiologists were cardiologists, urologists and orthopedic surgeons. The lowest-earners were pediatricians, internists and family medicine doctors. Still, while they are top-earners, orthopods’ and radiologists’ income declined an average of 10% between 2010 and 2011.

Physicians in single and multispecialty group practices, and those within healthcare organizations, earn higher incomes compared with colleagues in academia, outpatient clinics and solo practitioners.

If they had to do it all again, would physicians choose to be physicians? 54% would still pick medicine as a career…the other 46? Not so much…

Health Populi’s Hot Points: Economics is driving physician discontent in the United States. Not only are at least half of medical specialties seeing falling incomes, but the future potential for money looks dire in at least two respects: accountable care is seen by at least one-half of physicians as a cause for income to decline; and, regulations and paperwork eat further into profit margins for physician practices.

END_OF_DOCUMENT_TOKEN_TO_BE_REPLACED

U.S. health consumers’ purchase and use of over-the-counter medicines (OTCs) generate $102 billion worth of value to the health system every year. Half of this value accrues to employers who sponsor health insurance for their workforce; 25% goes to government payers (e.g., Medicare, Medicaid); and, 25% returns to self-insured and uninsured people.

For millions of health consumers, OTCs substitute for a visit to a doctor’s office: most cost-savings generated by OTC use are in saved costs of not visiting a clinician, as discussed inThe Value of OTC Medicine to the United States, published by the Consumer Healthcare Products Association in January 2012.

END_OF_DOCUMENT_TOKEN_TO_BE_REPLACED

3 in 4 of the Fortune 50 companies are part of the U.S. health economy in some way. Only 1 in 3 of these is in traditional health industries like pharmaceutical and life science companies, insurance, and businesses in the Old School Health Care value chain.

2 in 3 of the Fortune 50 companies involved in health are in new-new segments. In their report, The New Gold Rush, PricewaterhouseCoopers (PwC) identifies four roles for “prospectors” in the new health economy which will represent 20% of the GDP by 2019:

These are the disruptive roles that will be played by new, non-traditional entrants seeking their piece of the health care economy.

END_OF_DOCUMENT_TOKEN_TO_BE_REPLACED 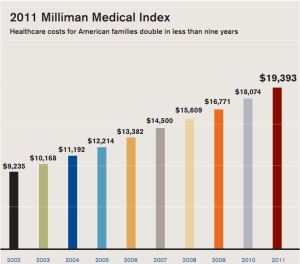 Health care costs have doubled in less than nine years for the typical American family of four covered by a preferred provider health plan (PPO). In 2011, that health cost is nearly $20,000; in 2002, it was $9,235, as measured by the 2011 Milliman Medical Index (MMI). To put this in context,

END_OF_DOCUMENT_TOKEN_TO_BE_REPLACED

The U.S. has few bright spots when accounting for global trade: we import much more than we export. Entertainment is America’s #1 export. After that, medical innovation shines.