On May 9, 2012, the Center for Medicare and Medicaid Services released proposed regulations to implement section 1202 of the Health Care and Education Reform Act of 2010. Section 1202 increases Medicaid payments made to primary care physicians for primary care services during the years 2013 and 2014 to Medicare payment rates, with the additional cost covered by the federal government.

END_OF_DOCUMENT_TOKEN_TO_BE_REPLACED

U.S. health consumers’ purchase and use of over-the-counter medicines (OTCs) generate $102 billion worth of value to the health system every year. Half of this value accrues to employers who sponsor health insurance for their workforce; 25% goes to government payers (e.g., Medicare, Medicaid); and, 25% returns to self-insured and uninsured people.

For millions of health consumers, OTCs substitute for a visit to a doctor’s office: most cost-savings generated by OTC use are in saved costs of not visiting a clinician, as discussed inThe Value of OTC Medicine to the United States, published by the Consumer Healthcare Products Association in January 2012.

END_OF_DOCUMENT_TOKEN_TO_BE_REPLACED

As every reader knows, the Supreme Court has agreed to consider challenges that have been brought to the constitutionality of two provisions of the Affordable Care Act (ACA) by twenty-six states, the National Federation of Independent Businesses, and individual plaintiffs.  The Court has scheduled the case for five and a half hours of oral arguments in late March.  It will probably decide the case early in the summer.

END_OF_DOCUMENT_TOKEN_TO_BE_REPLACED

John McDonough, one of the health care experts in Massachusetts, writes on his blog about the three-year renewal of the state’s Medicaid waiver.  John presents a history of the waiver and notes that it provides the “green glue,” i.e., the infusion of federal cash, that makes possible the health care reform process approved by this state several years ago.

END_OF_DOCUMENT_TOKEN_TO_BE_REPLACED

Today, November 14, 2011, the Supreme Court decided to review a decision of the Eleventh Circuit Court of Appeals striking down the minimum coverage requirement of the Affordable Care Act (ACA) as unconstitutional.  The case will probably be argued before the Court in March and decided in the early summer.

Procedurally, the Court “granted certiorari.”  This means that it agreed to review certain questions raised by the certiorari petitions presented by the various parties in the Florida case, including the plaintiffs who challenged the constitutionality of the Affordable Care Act — 26 states, the National Federation of Independent Business, and two private individuals — and the federal government, which defended the Act’s constitutionality.  The Eleventh Circuit had ruled against the federal government on the question of whether the minimum coverage requirement of the ACA is constitutional, but had ruled against the plaintiffs on all other issues.

END_OF_DOCUMENT_TOKEN_TO_BE_REPLACED

The Supreme Court, as expected, will consider the constitutionality of the individual mandate in health care reform. But as Tim Jost, a Washington and Lee University professor of law, noted today on theHealth Affairs blog, the high court will also hear arguments on the constitutionality of using Medicaid to expand insurance coverage to people earning up to 138 percent of the poverty line. States are challenging this mandate under what the attorneys general in the 26 states challenging the law call “the coercion theory.” Noted Jost:

The coercion theory calls into question a multitude of federal government programs.  Many federal programs, and not just health care programs, operate through conditional grants to the states.  Were the Supreme Court to hold that the Medicaid expansions are unconstitutional, it would open every one of these programs to judicial challenge.  New programs, or changes in existing programs, could be tied up for years as litigation proceeded.  Such as decision could pose a much greater threat to the power of Congress to address national problems than might a decision holding that Congress exceeded its authority under the Commerce Clause in enacting the individual mandate. It would be a truly radical decision.

I don’t know that this cases yet rises to the level of a Dred Scott decision for the 21st century. But its framing by the states challenging the law has all the hallmarks of the southern states that challenged the 1964 civil rights act, claiming states had the right to nullify federal laws that prohibited local laws condoning segregation, impeding voting and the like. The stakes in this spat over the individual mandate have suddenly grown significantly larger.

Get ready for big changes in provider reimbursement

Now that the debt limit deal is done, the hard stuff starts. While there’s been a lot of focus on the Pentagon budget and lack of revenue increases, the real heavy lifting will come when the super-committee convenes to figure out how to save the next $1.2 trillion. And their focus will be on Medicare, Medicaid, and provider reimbursement.

Because that’s where the ‘super-committee’ is going to have to find a big chunk of the additional savings required by the deal.

END_OF_DOCUMENT_TOKEN_TO_BE_REPLACED

The debt deal is finally done. But it really isn’t an agreement on what cuts will be made, just the process that will be used to make them.

The real work is left to the Congressional appropriators for the first $917 billion and for a super-committee of Congress for the second $1.2 trillion to $1.5 trillion in ten-year cuts.

That second tranche is where health care will make its contribution. The super-committee has to make its decisions by November 23rd and, as a practical matter, the Congress can only accept what the super-committee decides or face the consequences of the automatic $1.2 trillion fallback cuts.

When it comes to health care and the super-committee, all federal health care spending is on the table—–Medicare, Medicaid, the new law, benefits, and provider payments.

END_OF_DOCUMENT_TOKEN_TO_BE_REPLACED

While the news this morning is not good, I still don’t think Congress will fail to raise the debt limit; the economic consequences would be catastrophic, and there’s too much political risk for either party to allow it to go that far.

END_OF_DOCUMENT_TOKEN_TO_BE_REPLACED

Are you better off with Medicaid than if you had no insurance at all? The answer seems like a no-brainer: Of course you are. But, for the last few months, a cadre of conservative writers and intellectuals has argued that the program doesn’t actually help beneficiaries and may actually hurt them. To prove their point, they’ve cited a handful of studies in which Medicaid recipients ended up in worse health than people with no coverage whatsoever. According to Medicaid’s critics, this evidence suggests that expanding the program, as the Affordable Care Act would, is a bad idea.

Most social scientists I know reject these arguments. The reason: When you’re comparing people on Medicaid to people with no health insurance, there’s no simple, sure-fire way to account for the underlying differences in the two populations. For example, if you know you suffer from serious medical problems, you’re more likely to sign up for public insurance when it’s available. As a result, the Medicaid population may be fundamentally sicker than the uninsured population — and end up with worse medical outcomes, even if they’re benefiting from the program’s coverage.

END_OF_DOCUMENT_TOKEN_TO_BE_REPLACED

Read this in Belorussian here.

At oral arguments over the health reform law last week, the Eleventh Circuit panel showed a surprising amount of interest in the other constitutional challenge to the Affordable Care Act (ACA)—the states’ claim that the ACA’s Medicaid provisions are unconstitutionally coercive, effectively commandeering state governments into doing the federal government’s bidding. Brad Joondeph reviews the arguments presented by former Solicitor General Paul Clement on behalf of the states.

END_OF_DOCUMENT_TOKEN_TO_BE_REPLACED

How does a Medicaid block grant proposal like that of Congressman Paul Ryan relate to (1) poor treatment of cancer pain, (2) the epidemic of overdose deaths from prescription opioids, (3) the neglect of preventive medicine in the U.S., (4) unnecessary anticoagulant drug related bleeding deaths, (5) FDA drug regulator unresponsiveness to drug safety concerns, and (6) our broken medical malpractice system? My saga at the Los Angeles County + USC Medical Center (LAC-USC) ties these components of our health care system in crisis together.

END_OF_DOCUMENT_TOKEN_TO_BE_REPLACED

An excellent Chicago Tribune story by Rex Huppke details the impact of cuts to home and community-based services in Illinois. Huppke recounts the story of 81-year-old Lorraine Phifer, who cares for her son William, who has cerebral palsy. Phifer has a wheelchair van, but she can’t maneuver him into it by herself anymore. He has also required help with a wheelchair lift to get into and out of bed. Staff from the University of Illinois at Chicago Assistive Technology Unit have come out to the Phifer home and provided valuable help. That unit now faces a 70 percent budget cut.

UIC’s intellectual disabilities family clinics, which offer a range of services that are hard to access elsewhere, also face deep cuts. My intellectually disabled brother-in-law occasionally uses these facilities, too. I am not a disinterested observer.

END_OF_DOCUMENT_TOKEN_TO_BE_REPLACED

Medicaid and Medicare are in the news of late, as Congressional Republicans spar with President Obama and the Democrats on how best to rein in the ballooning costs of these entitlement programs, which make up a growing share of federal and state budgets. But what few policy makers seem to be talking about — at least in public — are the perverse financial incentives built into the system that allow the companies who manage Medicaid contracts on a statewide basis to make profits at the expense of quality health care for Medicaid recipients. As a result of these perverse incentives, many Medicaid patients, particularly those being treated for mental health problems, are either terribly under-served or in some cases, badly over-treated. The upshot, in many cases, is poorer health outcomes and higher Medicaid costs.

END_OF_DOCUMENT_TOKEN_TO_BE_REPLACED 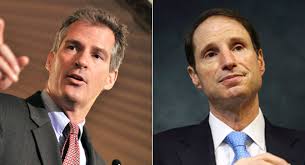