The Census Bureau reported earlier this week that income concentration ratcheted up another notch in 2010, with the people in the bottom 40 percent of the income distribution losing ground while people in the middle of the income distribution regained a slight amount of previously lost income (no doubt from the addition of nearly 2 million jobs last year compared to a loss of 4 million jobs in 2009). People at the top, meanwhile, held steady, with the top 20 percent of the population still grabbing about 50 percent of all income in America. Despite 2010 being a “recovery” year, the long-term trend of concentration of income continued apace.

The impact on household wealth of this long-term trend has been stunning. Income becomes wealth when people translate it over time into savings and investment, whether in homes, businesses or financial assets. What’s happened to all the additional wealth created in our society over the last 30 years?  Every dime of increased wealth has gone to the top 40 percent (the lower 60 percent have actually lost ground). The top 5 percent grabbed a stunning 81.7 percent of all wealth created in our society over that period. Larry Mishel of the Economic Policy Institute created this revealing chart from the latest data: 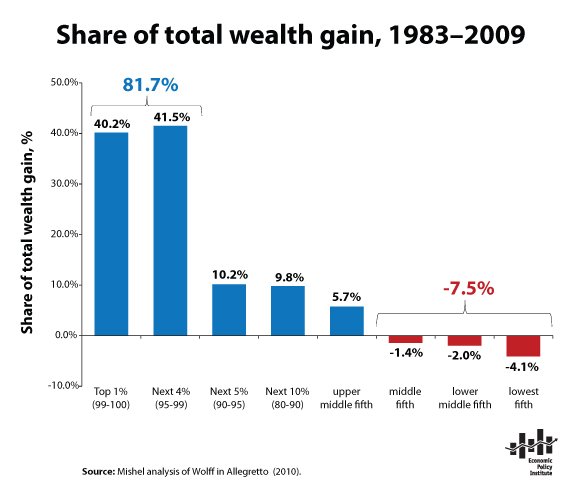